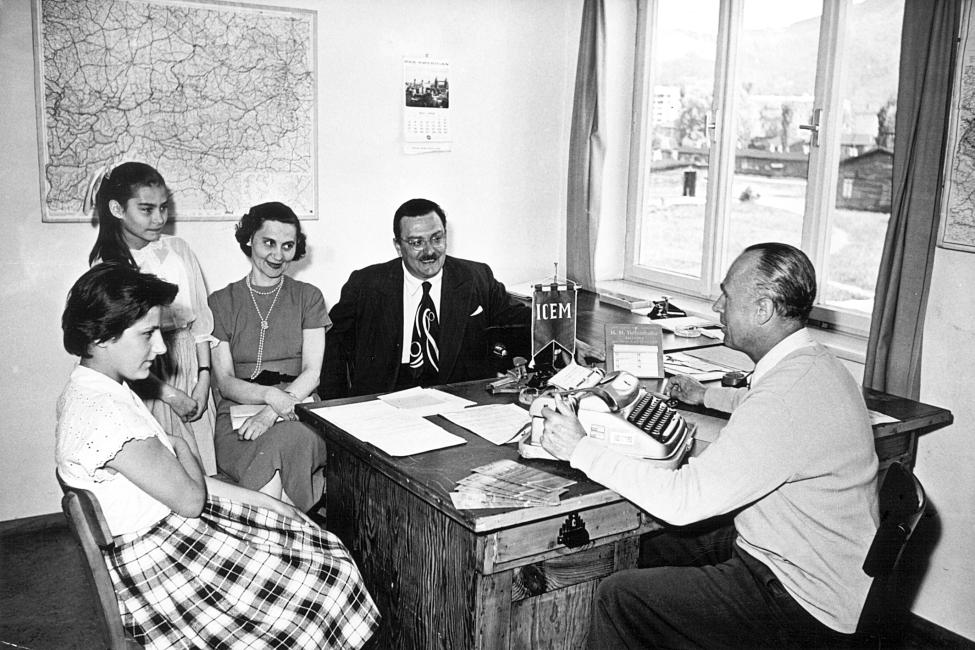 1959 © International Organization for Migration
A family makes arrangements in Salzburg for a flight to the United States. 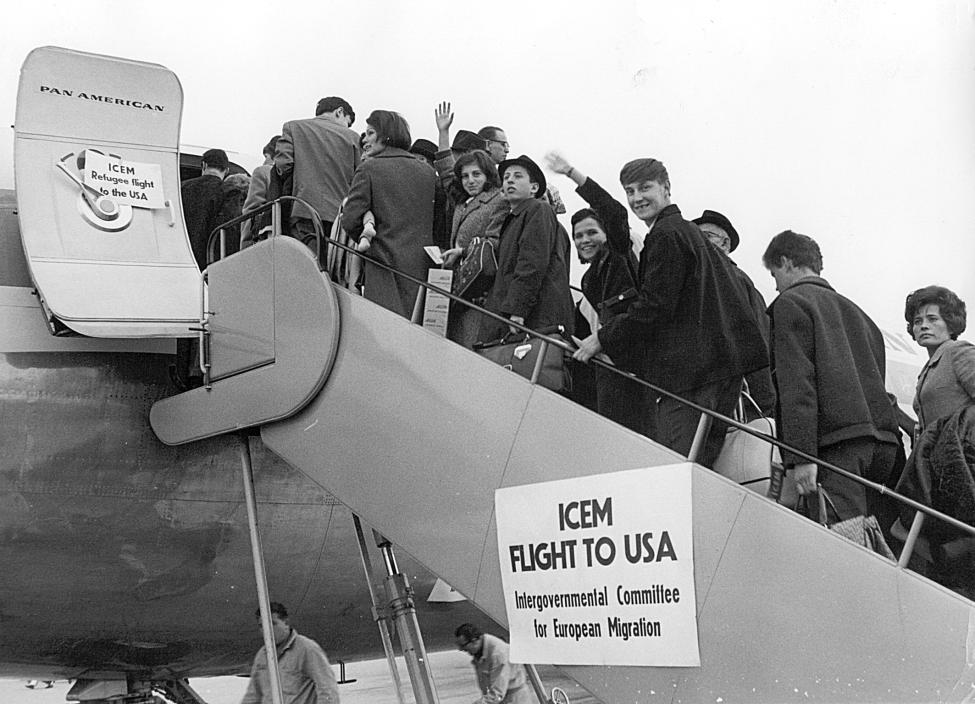 1966 © International Organization for Migration
Eastern European refugees on the way from Austria to the USA. 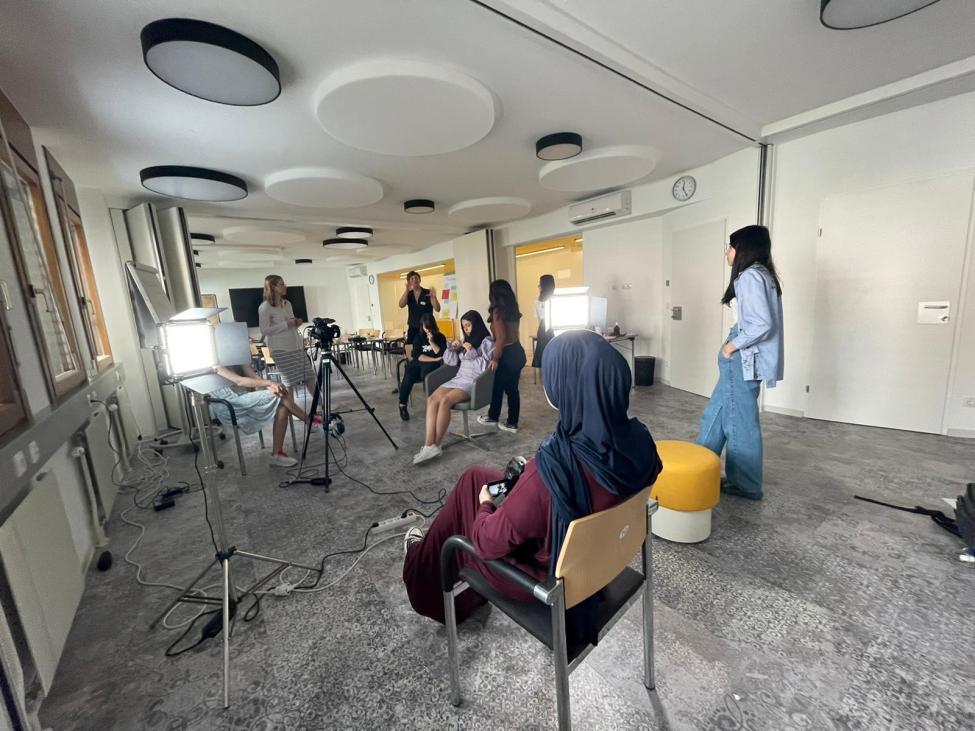 2021 © International Organization for Migration
Girls and young women with a migration background in a media workshop.

Geneva/Vienna, 3 December 2021 – 5 December 2021 marks the 70th anniversary of the founding of the International Organization for Migration (IOM). With over 20,000 employees working in 450 offices around the world, IOM is the leading intergovernmental organization in the field of migration as part of the UN system. 174 member states belong to it – and Austria has been involved from the very beginning.

The history of the organization is closely linked to that of its founding member Austria. However, its relevance for Austria is also reflected in the increasing scope of activities that are being implemented with Austrian partners. These range from integration to research and combating trafficking in human beings to support for voluntary return and reintegration, humanitarian aid and development cooperation abroad.

"Migration is a multi-layered phenomenon that is associated with both great potential and challenges," emphasizes Marian Benbow Pfisterer, Head of the IOM Country Office for Austria. "Only together can we succeed in overcoming the challenges and shaping migration in such a way that it benefits everyone – migrants as well as the host society, countries of origin, transit and destination. We are grateful that we have been able to work with partners such as the Austrian ministries and authorities, UNHCR and above all the NGOs in Austria for 70 years to support migrants in Austria, but also in other countries."

The post-war years – International solidarity for refugees and displaced persons

The organization was founded on 5 December 1951 during an international migration conference aimed at finding solutions to the intolerable situation of refugees and displaced persons in Europe after the Second World War and opening up new perspectives for Europeans through migration.  19 states, including Austria, decided to set up a Provisional Intergovernmental Committee for the Movements of Migrants from Europe (PICMME) – the predecessor organization of IOM. Their task: to promote international cooperation in order to enable people in Europe to emigrate to host countries.
Austria saw in the new organization an opportunity to alleviate the fate of the refugees still housed in camps and decided to join the provisional committee for an initial financial year. In 1953, the statutes of the organization – now renamed the Intergovernmental Committee for European Migration (ICEM) – were adopted, and Austria decided in the same year to extend its membership until revoked.
A liaison office was set up in Vienna, and branches were set up in Salzburg and Linz for cooperation with the federal states.

Only a few years later, Austria and ICEM faced the first major test: In the course of the events in October 1956 in Hungary, around 180,000 people fled to Austria. Several states agreed to support Austria and take in refugees; ICEM took responsibility for the onward journey of 144,000 people. The organization registered the refugees, provided medical treatment, offered language courses and vocational training opportunities, working closely with Austrian authorities, the host states, as well as the UN refugee organization UNHCR, the League of Red Cross Societies and Austrian NGOs.

From European to global cooperation

In the following years, Austria was not unaffected by crises abroad. When more than 160,000 Czechoslovak refugees came to Austria in 1968 as a result of the "Prague Spring", ICEM organized the onward journey of about 40,000 of them abroad.
In the 1960s and 1970s, ICEM increasingly dealt with forced migration from countries outside Europe, the impact of which also affected Austria. When in 1972, due to a decision by the President of Uganda, all residents of Asian origin had to leave the country, Austria agreed to take in a contingent of refugees on a permanent basis; and, at the request of the British Ambassador as well as ICEM and UNHCR, allowed the temporary stay of other affected persons who would later emigrate to other countries. As a result, ICEM supported more than 1,000 affected persons in emigrating from Austria. In the following years, ICEM, UNHCR and Austria continued to work together to ensure that refugees, for example from Chile, the Indochinese region or Vietnam, could be granted protection in Austria.

In recognition of its increasing global role, the organization became the Intergovernmental Committee on Migration (ICM) in 1980 and the International Organization for Migration (IOM) in 1989.

In Austria, IOM continued to support migrants in their onward migration to host countries. In the 1980s, these were mainly Eastern European refugees, for example from Poland, Czechoslovakia, Hungary, and Romania. IOM also supported Austria in other ways, for example through flights for Austrian development workers or, from 1990, with the return and reintegration of refugees from Chile living in Austria.

The crisis in the Balkans in the 1990s was also of great relevance for Austria. 13,000 people from Croatia and 90,000 people from Bosnia and Herzegovina found protection in Austria from the war in the former Yugoslavia. Between March 1998 and May 1999, almost 795,000 people fled Kosovo*. Together with UNHCR, IOM organised a humanitarian evacuation programme that brought around 80,000 Kosovar refugees to over 30 host countries – around 5,000 of whom were taken in by Austria.
Between 1993 and 2001, the IOM office in Vienna supported around 4,400 Bosnian refugees on their departure and onward journey. IOM, together with the Organization for Security and Co-operation in Europe (OSCE), also organized the participation of refugees in Austria and other countries in elections in Bosnia and Herzegovina and in the municipalities in Kosovo* in order to enable them to participate democratically.
In the second half of 1999, IOM, in cooperation with the Austrian authorities, the federal states and NGOs such as Caritas, began to support the return of Kosovars from Austria.

The importance of support for voluntary returnees increased continuously in the years that followed. In 2000, the Federal Ministry of the Interior and IOM signed an agreement on cooperation in the field of voluntary return and reintegration; since then, more than 50,000 people have been supported in their voluntary return from Austria to a wide variety of countries of origin. Until the end of 2020, the main partners for this were the Austrian NGOs which offered return advice and perspective clarification for interested migrants or those obliged to leave the country; since the beginning of 2021, IOM has been working together with the now responsible Federal Agency for Care and Support Services (BBU) GmbH in this area. IOM is always committed to ensuring that people are not left alone even after their return and, with financial support from the EU and Austria, was able to support more than 2,000 people in their reintegration in countries such as Kosovo, Moldova, Nigeria, Georgia, the Russian Federation/Republic of Chechnya, Pakistan, Iran and Afghanistan between 2010 and 2020.

Partnerships were and are also central to IOM in other areas of work. Together with the responsible ministries and authorities, UNHCR, Caritas Austria, Diakonie Austria and the Austrian Red Cross, IOM contributed to the humanitarian admission of a total of 1,900 Syrian refugees between 2013 and 2017, mainly from Turkey, Lebanon and Jordan to Austria. However, cross-border cooperation is also practiced when Austria supports IOM's humanitarian activities in other countries, such as currently in Greece, Libya or Bosnia and Herzegovina, or IOM projects on the ground within the framework of Austrian Development Cooperation. In order to deal with the connection between migration and development cooperation in a meaningful way, IOM also supports Austrian NGOs with migration-specific expertise working group "Migration and Development" of the umbrella organization Global Responsibility – Austrian Platform for Development and Humanitarian Aid.

Cross-border cooperation and coordination is also the core concept of the European Migration Network (EMN), an EU-wide network that provides objective and reliable information on migration and asylum, thus making an important contribution to evidence-based migration policy. Since 2003, IOM Austria has been acting as the National Contact Point Austria and has published numerous publications, organized high-level international conferences and built up a flourishing national network of experts.

The fight against human trafficking is inconceivable without strong partnerships: On the one hand, IOM contributes to the work of the Task Force on Trafficking in Human Beings, which consists of representatives of the responsible ministries, the federal states and non-governmental organizations and is headed by the Federal Ministry for European and International Affairs. On the other hand, IOM, together with victim protection institutions such as LEFÖ or MEN-VIA, offers training courses on the identification of victims of human trafficking and on intercultural competences in the Austrian asylum procedure.

Last but not least, this partnership-based approach is also part of the work with migrants themselves. In the workshops on integration organized by IOM Austria, in which young men and women with a migration background acquire intercultural skills and committed members from different migrant communities are supported as intercultural mediators, IOM works together with representatives of the diaspora at eye level.

"The quality of our work grows with the cooperation," says Head of Office Marian Benbow Pfisterer with conviction. "Especially in times like these, when a pandemic is keeping us in suspense, mobility is limited and society is exposed to enormous tensions, it is important to pay attention to togetherness. For this reason, we want to consciously focus our attention today on the many partners without whom we would not be able to do our work. It is impressive how many people and organizations in Austria are joining forces to help."

Please visit IOM History for more details on the global history of IOM.

Watch IOM's Anniversary Video IOM at 70 - The Voices of Migrants

* References to Kosovo are to be understood in the context of United Nations Security Council Resolution 1244 (1999).